Seeing Greener Grass: The negative effects of comparing yourself to other people


If this sounds familiar, you may be falling into the trap of negative social comparison.

Basically, negative social comparison is exactly what it sounds like: Making ourselves feel bad by comparing ourselves to others who we perceive to be more successful than we are.

Social comparison is one of the most common manifestations of self-judgment.  How common is it? Some psychologists suggest that social comparison is unavoidable, and theorize that comparing ourselves to others is how we measure ourselves objectively. But when we look at the lives of other people and see only their successes, we can start to feel bad about ourselves. We may begin to think that there is something wrong with us that we are not at "the same level " as our peers, or we simply may begin to feel bad that we "are not where we should be."

Negative social comparison decreases our own self-esteem, and a reduction in self-esteem is one of the contributors to depression and other mood disorders. It also damages our self-confidence, and makes it more difficult for us to achieve the kind of life we want. 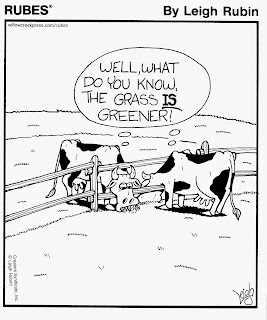 So what does negative social comparison look like? Recent research suggests that using Facebook (and to be fair, other social networks, like Pintrest) can foster negative body image.  More than half people (men and women, in this study) report that they feel bad about their bodies after seeing pictures of themselves and others on Facebook.

Further, when all your friends are posting about their great experiences and accomplishments, this can make you feel bad about yourself. Several studies have documented this. Some experts have even suggested limiting the number of friends, which seems to turn down the effect of negative social comparison.

So how do you stop negative social comparison?

First recognize that you are doing it, and when you are doing it. Ask yourself: When do you feel bad when you think about the accomplishments of others? Do you notice that you feel worse about yourself when you see other people who have something you want? See if you can discover what kinds of situations and circumstances prompt your negative social comparison. For example: I know someone who feels bad when he sees a man who has a more muscular body than he does. For him, the first step is recognizing that this specific behavior (seeing someone who is more muscular and feeling bad) is the negative social comparison in action.

Second, make a commitment to stop. When you catch yourself doing the comparing, tell yourself, “Stop.” Then, think of something else. It's useful to have something else already in mind that you will distract yourself with—for example, and upcoming trip, or something in the future you are looking forward to. Or, remind yourself that you do not know the whole picture of the other person's life. Maybe, all things considered, that person is unhappy in other ways, and would change places with you if given the chance.

Third, get big picture. Ask yourself, “Would I really be happier if I had X, or do I just think I'd be happier?” Or, if that doesn't work, ask, “Will any of this matter in 10 years?” I had one client who used to “get big picture” on an astronomical scale: She would say, “How can I care what kind of car my coworkers drive when there are more than 100 billion galaxies in the universe?” In other words, think of a bigger perspective.

Fourth, make it a habit to avoid social comparison. Think of this as a positive step you can take towards your mental wellness. You may want to make it a habit to be grateful for what you have and who you are, which is a great way to avoid social comparison. Remind yourself that everyone in the world is different, and we all have struggles. You can also repeat certain phrases to yourself that reinforce your commitment. One that I like is “Don't compare your insides to other peoples' outsides.”