I wrote a post about self-love last week, and I wanted to continue to write about that theme. As I mentioned in that post, I believe that self-love is overrated in many parts of our culture; but I also believe that it is important to feel good about who we are in order to be mentally and emotionally healthy.

Feeling good about who are comes from inside of us. It comes from recognizing when we have done something helpful or kind for someone else. I remember one client who was very successful in his profession, and he was making a great deal of money. He came to see me because he felt “worthless.” We worked to identify the origins of these feelings, and discovered that he had been pursuing financial achievement for years and neglecting any kind of service for others, and this was causing him the feelings of worthlessness. He began to volunteer his time—tentatively at first, and then more and more—working at a homeless shelter. He reflected, at the end of our time together, “I feel that I do more good in those hours than in all the boardrooms and meetings I've had in my entire life.” 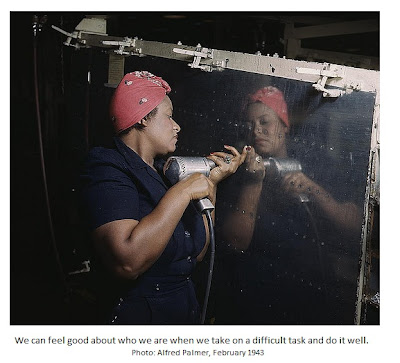 We also feel good about who we are when we accomplish something difficult, something that took effort and hard work and time. I had a client once who came to see me for depression. At our first session, I noticed he was wearing a class ring, and I asked him about it. He said it was not his ring: He had purchased it at a second-hand store. He then disclosed that he had never finished college, and that this was one of the most painful parts of his life. As we worked together, he decided to go back to school and get his degree. At this point in his career, the degree he was working on would not be helpful to him professionally, but it made an enormous difference to his sense of himself. He eventually did finish his degree, and at the same time his depression gradually lifted.

Feeling good about ourselves also comes from stopping when we are about to do something that we know we will regret. I once worked with a woman who was struggling with a long-lasting heroin addiction. She only used about once a month, but during that time she would be gone from her family for two or three days. She had tremendous shame around her addiction. We worked together for a long time. It was difficult, frustrating work for both of us. She would make progress, and then go back to using. But overall, her use did decrease. She eventually stopped using, and we agreed that she would graduate from therapy. One day about a year later, she was diagnosed with a serious illness and was told she would only have about six months to live. She called me and came back into therapy. When I asked her how she felt about dying, she said, “I'm surprised, but I am OK with it. I mean, I'd rather not die. But I always said I didn't want to die an addict—and now I know that I won't. And that gives me peace.”

These are the things that help us feel good about ourselves—that help us develop self-love. It does not come from other people reassuring us that we are good or worthy; it comes from knowing in ourselves that we have done the difficult thing, or the thing that was valuable and helpful to another person which we did not need to do. It does not come quickly from reading a self-help book or watching a lecture, and it is not cheaply purchased with platitudes. Self-love builds over time, and it comes from the things we do when we choose to live up to our potential to be our best self.
Posted by Matt Sweet at 8:26 AM