Ouroboros (A reflection on praxis)

I was in session with a client recently recently speaking about vicious cycles. For almost any problem that an individual has, it seems that some theorist has created a model of a vicious cycle that supports and deepens that problem. For example, there are cycle of domestic violence, sex addiction, obsessive-compulsive behavior, anger, substance abuse, depression, eating carbohydrates, and so on.

I think that these cycles do define real phenomena, certainly. But what I think is interesting to notice is that there are so many accurate descriptions of human behavior that are cyclic. It makes me wonder if the validity in these cycles really implies that the cycles are self-perpetuating, or if they are merely patterns of reoccurring behavior.

The mere presence of a recurring cycle does not require that the cycle is self-perpetuating. I think this is a fine point that is often missed in therapy. For example, in most cycles, there is a period in which the individual is "performing" or "functioning." In the cycle below, it's called "moral resolve." But essentially, it is the period of relative calm in which the individual is not engaging in whatever behavior is causing the problem. 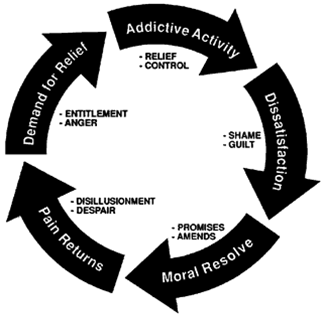 But notice how "Moral Resolve" leads right into "Pain Returns." And it's this way across the board--the "functioning" part of the cycle leads right into the "non-functioning" part of the cycle. Why is that? Is the one a necessary consequence of the other? And, does this conceptualization of a cycle take power away from a client in some way? Because, after all, isn't this the state at which a client engages in recovery?

The title of this post is "ouroboros." I like using myth, symbol and story as a vehicle for understanding the human psyche. I think that the good, long-standing myths that have been passed down to us have a resonance with the daily struggles of humanity, and that viewing our modern concerns through the lens of age-old problems and ideals gives them deeper meaning, as well as providing us with insight into ways to address some of our more persistent problems. And when I think of vicious cycles, I think of the ouroboros. From Wikipedia:

The Ouroboros is an ancient symbol depicting a serpent or dragon eating its own tail. The name originates from within Greek language; οὐρά (oura) meaning "tail" and βόρος (boros) meaning "eating", thus "he who eats the tail."

I wonder if the image of the ouroboros is useful for the idea of a vicious cycle, since it fully implies that the control for the continuation of the cycle is fully contained by the individual who creates the cycle, rather than a necessity of the cycle itself. The ouroboros also suggests the self-destruction inherent in the cycle. I can't help by comment on the mythic symbolism of the ouroboros encircling the earth--the way that those who are trapped in these kinds of cycles often feel that their entire worlds are circumscribed by the cycle itself. When I am describing cyclic behavior to clients--"vicious cycles"--I will add details to show the snake eating its tail. 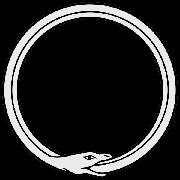