I want to mention two book reviews that crossed my path this week that might be of interest to existentially-minded individuals. These works are not specifically psychotherapeutic in nature, but I believe that writers and philosophers throughout history have addressed themselves to the same concerns that trouble us in this modern world, and so I think it is always useful to maintain a connection with classic literature and philosophy. The first is a review of Jennifer Ratner-Rosenhagen's book American Nietzsche. (The review is written by Thomas Meaney.) Nietzsche has been a topic of fascination for existential psychotherapists since Rollo May, and Irvin Yalom wrote a novel to answer the hypothetical question, "What if psychotherapy had been invented with Nietzsche as one of the first patients?" Yalom sees in Nietzsche a patient who views his intrapsychic difficulties (and in fact, physical difficulties, as Nietzsche is being treated for migraines in the book) as a source of strength, not as something to be avoided. Rather, the quote "What does not kill me, makes me stronger" is taken literally and shaped as a part of the treatment plan. (The quote is Nietzsche's own of course, from Twilight of the Idols.)

Nietzsche's gift to psychotherapy is quite large. Nietzsche questioned authority in a big way, writing "As long as the world has existed no authority has yet been willing to let itself become the object of critique." He insisted that meaning, purpose and morality could not spring from traditional beliefs and be unquestioned merely because they were traditional. He looked at the genealogy of ideas, engaging in a kind of psychoanalysis of the history of morality, and resolved that humans have responsibility to create their own meanings about morality--and even about existence. Today, the idea of taking a rigorous study of the source of a particular belief sounds like something we would do in a therapist's office, and we owe a debt to Nietzsche, who in his own way said, "Let's take a look at where these things that we believe to be true actually came from."

I have used Nietzsche's work in treatment myself--sometimes asking clients to read his work, sometimes just using quotations such as the one above, or "When we are tired, we are attacked by ideas we conquered long ago." Nietzsche's idea that we are constantly becoming ourselves--shaping ourselves into who we are--is a very useful idea for psychotherapists. According to the review of Ratneer-Rosenhagen's book, she shows how Nietzsche has been viewed by Americans since the publication of his works--both understood and misunderstood. 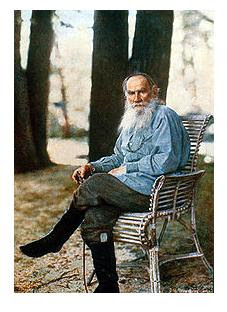 The second review is of Tolstoy: A Russian Life, by Rosamund Bartlett. (The review is written by Martin Rubin.) If for no other reason, Tolstoy deserves a place on the existentialist psychotherapist's bookshelf for the famous first line of Anna Karenina: "All happy families are alike; each unhappy family is unhappy in its own way."

Tolstoy has certainly given us much that is useful and engaging when it comes to examining our lives and our mental health. His short work The Death of Ivan Ilyich is one such work, which addresses the terror of death as well as the definition of a good life.

Of special note for psychotherapists who are also social workers: Leo Tolstoy was a great influence on Jane Addams, the mother of social work. She admired his ideal of working in solidarity with the "common person," rather than standing apart and working for change from a distance. She was an active admirer of Tolstoy until her death.

My favorite story of Jane Addams is of her visit to Tolstoy. Addams made a pilgrimige of sorts to visit Tolstoy on his estate, where he worked along side of the laborers. He met her dressed in working clothing, and proceded to comment on Addams' dress, criticizing her for wearing fashionable clothing rather that practical working garb. He also critiqued her for not working next to the laborers in Hull House. Addams was taken by this sentiment, and upon returning to Hull House she resolved to bake bread for two hours each day, as a way of living up to Tolstoy's values. However, she quickly saw the folly in this arrangement, writing: "The half dozen people invariably waiting to see me after breakfast, the piles of letters to be opened and answered, the demand of actual and pressing wants–were these all to be pushed aside and asked to wait while I saved my soul by two hours' work at baking bread?" (from Twenty Years at Hull House.) I think this story shows so clearly how Addams' idealism and vision were tempered by her practicality, as well as the beginnings of the professionalization of social work.
Posted by Matt_Sweet at 9:26 AM